Dad. What a guy. And what a great sense of humour… In the run-up to Father’s Day, there’s nothing better to entertain the masses than a good old cringey, groan-inducing dad joke. So, we asked for your favourites, and boy did we get some good ‘uns. And so, without further ado, here’s the best of the lot.

“Waitress: ‘Do you folks need anything else?’
Dad: ‘Yeah, how about a million bucks?’*only Dad laughs” – Brendan Cotter via Twitter

“What do you call a fly without wings?
A walk.” – Ryan via Twitter

“Q. What’s brown and sticky?  A. A stick.” Philip Jones via Twitter

“What do you call a smelly fairy?
Stinkerbelle!” – K te P pe via Twitter

“Two fish in a tank. One turns to the other and says, ‘do you know how to drive this thing?’” Tom Stafford – via Twitter 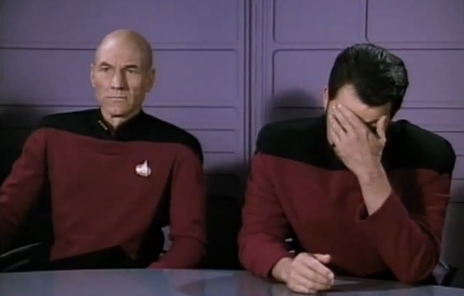 “What’s the best thing about Switzerland? Well, there’s the flag for a start. That’s a big plus. #DadJokes” – Dom Harrison via Twitter

#dadjokes “What’s the difference between a buffalo and a bison? You can’t wash your hands in a buffalo” – Michael Bell via Twitter

“2 Parrots stood on a Perch. 1 says to the other… ‘Can you smell fish?’” #DadJokes – Steve via Twitter “What do you call a donkey with 3 legs? A wonky donkey!” – Natasha via Twitter

“What’s the most magical breed of dog? The Labracadabrador” – Anabel via Twitter

“A jumper cable walks into a bar. The bartender says, ‘I’ll serve you, but don’t start anything.’” #DadJokes stopgap via Twitter

“Why did the mushroom go to the party? Cuz he’s a fungi” – Jess O’D via Twitter

“Someone stole my thesaurus, I have no words to describe how angry I am” – Just Jim via Twitter #DadJokes “Why was the pie waiting on the corner?…. Because It was meat n potato!” – Claire Causer via Twitter

#DadJokes “What did the old chimney say to the young chimney? You’re too young to smoke!” – Jess O’D

“Jamaica? No, she went of her own accord!” – Tracey Dawson “I’ve just watched a documentary about beavers… It was the best dam program I’ve ever seen.” Dave Bramley via Facebook

Thank you, and goodnight.
If you feel the need to get your dad something better than a joke for Father’s Day, check out our handy Father’s Day gift guide.